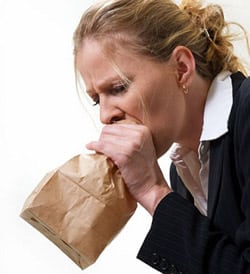 Panic attacks are caused by interpretation of physical sensations. They are simply caused by how we think.

Curing panic attacks can be as simple as understanding what panic is and what causes it.

Panic is an extreme exaggeration of anxiety or fear. It is made up of a combination of physical sensations such as rapid heartbeat, palpitations, sweating, difficult breathing, shaking, dizziness or disorientation. These are interpreted as threatening and result in an extreme emotional response.

You were not born with panic attacks – they are caused by distorted interpretation or thought. You can cure panic attacks by learning to re-interpret the physical sensations more realistically.

For example, a rapid heartbeat may be unusual – but it does not necessarily mean you are having a heart attack.

Many people have experienced panic at least once in their lives, but with panic disorder, such attacks become frequent. Panic disorder has no respect for gender, age, cultural background, profession or intellect – it can affect people from all walks of life and can elop at any time for no apparent reason.

Panic disorder is perpetuated by a process which is similar to how some people develop insomnia. One night you may have trouble sleeping, the following day you are concerned that you might have trouble sleeping the next night. Therefore you’d be tired and unable to perform certain tasks.

The worry that keeps people awake at night becomes a trend whereby they expect to have trouble sleeping in future – even if this is subconscious. Consequently, that is exactly what happens with panic attacks. It’s sort of a self-fulfilling prophecy.

Remember – no-one has ever died from a panic attack. They may be unpleasant but they are not deadly.

Cure panic attacks now. Simply contact Online Counseling and we can help you learn how.